The University of Texas at El Paso and two other El Paso Makes collaborators will use a $964,000 federal appropriation to help local manufacturing companies develop proposals for U.S. Department of Defense contracts that will lead to high-quality, high-paying jobs in the region for UTEP graduates.

UTEP’s Aerospace Center and W.M. Keck Center for 3D Innovation will work with the El Paso Chamber of Commerce and the National Center for Defense Manufacturing & Machining (NCDMM)/America Makes to accelerate the region’s manufacturing competitiveness. The program will start Sept. 1, 2022.

The Community Funding Project is part of the Bipartisan Omnibus Appropriations bill that President Joe Biden signed into law March 15, 2022. Along with the creation of high-paying jobs, the funding will help local businesses to develop accounting practices and contracting methods to enhance their ability to get work with national defense, aerospace and advanced manufacturing companies.

Ahsan Choudhuri, Ph.D., associate vice president of UTEP’s Aerospace Center, said the funding is the latest in an integrated wave of initiatives to create a regional high-tech ecosystem that will help small- to medium-sized manufacturers improve their chances at federal contracts, which would lead to jobs for UTEP graduates.

“The Aerospace Center and the W.M. Keck Center at UTEP are taking the lead in regional economic development,” said Choudhuri, who also is a professor of aerospace and mechanical engineering. “We are spearheading this new paradigm of economic development for El Paso that is anchored in advanced technology jobs. UTEP is committed to creating good job opportunities for its students. We’ve become a powerhouse.”

Choudhuri estimated that this program could create 4,000 engineering jobs and 13,000 manufacturing jobs by 2030. He added that entry-level engineers earn about $72,000, and the Aerospace Industries Association reported that aerospace and defense-manufacturing jobs pay around $91,500.

The UTEP educator praised U.S. Rep. Veronica Escobar, who represents most of the El Paso area, for her efforts to secure the appropriation. He called her a longtime champion of economic development investments that would raise wages and provide job opportunities for UTEP’s talented engineering graduates. He said that Escobar’s leadership and advocacy, along with the efforts of the El Paso Makes team, have helped create the necessary programs and business support infrastructure to create high-paying jobs in defense, aerospace and advanced manufacturing.

El Paso Makes is a partnership of the Aerospace Center, the Keck Center and the El Paso Chamber with a mission to create jobs and business opportunities in aerospace, defense and advanced manufacturing in El Paso.

Choudhuri added that each member of the El Paso Makes team brings expertise that benefits the region. For example, he said a portion of the money would fund the establishment of a NCDMM office in El Paso. That office would assist El Paso companies to upgrade their business practices.

Ryan Wicker, Ph.D., executive director and founder of the Keck Center and professor of aerospace and mechanical engineering, said he was particularly pleased with the NCDMM’s decision to open a standalone office in El Paso. He explained that the NCDMM is the parent organization of America Makes, a public/private partnership founded in 2012 to promote additive manufacturing, also called 3D printing. The NCDMM and the Keck Center have been partners since 2014. The Keck Center was designated the first America Makes Satellite Center in 2015. 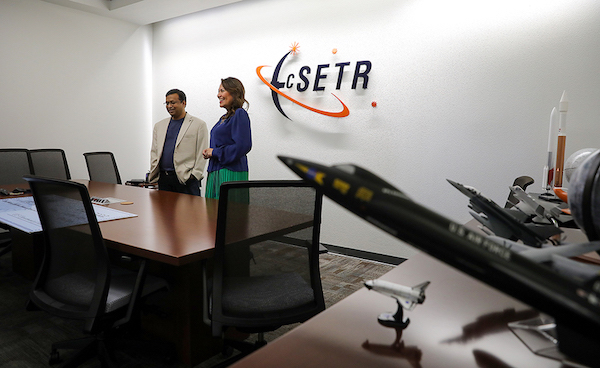 UTEP and two other El Paso Makes collaborators will use a $964,000 federal appropriation to help local manufacturing companies develop proposals for U.S. Department of Defense contracts that will lead to high-quality, high-paying jobs in the region for UTEP graduates. Ahsan Choudhuri, Ph.D. (left), associate vice president of UTEP’s Aerospace Center, praised U.S. Rep. Veronica Escobar (right), who represents most of the El Paso area, for her efforts to secure the grant. Photo: UTEP Marketing and Communications

“(The Keck Center) has many programs with NCDMM and we are very excited to expand this partnership through this award,” Wicker said.

El Paso-area businesses that want to participate in this program must join the Aerospace and Defense Supply Chain Innovation Network for Manufacturers, an El Paso Makes initiative. Membership is free. There already are 40 member manufacturers, but Choudhuri said he expects to have 80 before the end of 2022 and 300 by the end of the program in 2030.

César Terrazas, Ph.D., managing director of AconityUS, Inc., said his research/manufacturing company is excited about its association with El Paso Makes and he looks forward to growth in hiring and government contracts. The company specializes in providing 3D printing equipment that can produce metal components used by defense and aerospace companies.

Terrazas said the parent company, Germany-based Aconity3D, opened an El Paso office in University Towers, 1900 N. Oregon St., in 2018, but started its relationship with UTEP when the Keck Center installed an Aconity3D system in 2014. The Juárez native said the collaboration with El Paso Makes could lead to larger, more suitable accommodations at a proposed industrial innovation park near the El Paso International Airport.

“UTEP has offered us a lot of support and we want to continue that symbiotic relationship,” said Terrazas, a UTEP graduate who earned his bachelor’s and master’s in mechanical engineering in 2008 and 2010, respectively, and his doctorate in materials science and engineering in 2014. “Through support from this grant, we hope to expand our capabilities, get support to participate in government contracts, and provide opportunities for the high-caliber talent being prepared and graduating from UTEP.”

Choudhuri said this program will begin a renaissance of manufacturing in the United States with a focus on defense, aerospace and advanced manufacturing.