Many recent graduates from The University of Texas at El Paso continue to revel in their achievements, and rightly so, but they are not the only Miners who earned honors from groups at the local to national levels.

UTEP President Diana Natalicio garnered her own share of accolades as the academic year neared its end. Since April 2019, five different organizations have bestowed or plan to bestow on President Natalicio awards for her contributions to UTEP and the El Paso region. Among the groups that recognized President Natalicio are Fraternity Lodge #1111, Visit El Paso, the Hub of Human Innovation, the YWCA El Paso Del Norte Region and the University of California, Berkeley’s Division of the Academic Senate.

The awards embellish this chapter in President Natalicio’s higher education story. In May 2018, President Natalicio announced that she would retire after 31 years as UTEP’s leader. Her tenure makes her the longest-serving current president of a public doctoral/research university in the country.

In her time at UTEP, she has deftly guided the University to national prominence as a research institution, all the while being relentless to ensure access and affordability for the student population that it serves. In 2019, the Carnegie Classification of Institutions of Higher Education designated UTEP as an R1 top tier doctoral university with very high research activity. UTEP is one of only 130 (4.5%) universities among the 2,883 four-year higher education institutions across the U.S. to earn this distinction.

Fraternity Lodge #1111 recognized President Natalicio for her tireless service to UTEP and to the El Paso community with the Grand Lodge of Texas’ Community Builder Award on May 28, 2019, at the historic El Paso Scottish Rite Temple.

“I am honored to accept the Community Builder Award from the downtown Masonic Lodge on behalf of the UTEP team,” President Natalicio said. “This recognition reflects the efforts of the University faculty and staff who have worked diligently to make a top tier higher education accessible to the talented students of this region, and support them throughout their college journeys. Our work would not be possible without our partnerships in the El Paso community, including such fraternal organizations as Fraternity Lodge #1111, whose members model values that we hope all UTEP graduates embody: tolerance, respect and service. On behalf of everyone on the campus, I want to express my sincere appreciation to the Grand Lodge of Texas for this award and for its commitment to El Paso’s and UTEP’s promising future.”

Leaders of Fraternity Lodge #1111, a fraternal order established in El Paso in 1915, said the award recognizes outstanding non-Masons who have distinguished themselves through their service to the community, local and state governments, places of worship, or to humanity at large. The group said it decided to honor President Natalicio based on UTEP’s physical and academic growth during her tenure, which happened in tandem with a demographic shift in student population to one that is more representative of the region.

“Dr. Natalicio is truly an El Paso treasure,” said Steve Swingle, worshipful master of Fraternity Lodge #1111. “When we were deciding who to present this award to, she was our top choice and one that I am extremely proud to present. Her work has made our community a shining beacon that is in large part due to her dedication as President of UTEP.”

Visit El Paso, an organization that oversees the city’s destination marketing, recognized President Natalicio’s role in the enhancement of El Paso’s stature as one of the country’s marquee destinations on May 9.

The group presented President Natalicio with its Spirit of Amigo Award, which recognizes a person or organization that has had a profound and positive effect on El Paso’s image. Visit El Paso presented the award during the organization’s 16th annual National Travel and Tourism luncheon at the Judson F. Williams Convention Center. UTEP’s Hall of Fame basketball coach Don Haskins is a previous recipient of the award.

“I am pleased to accept this award on behalf of UTEP’s 25,000-plus talented and hard-working students, and the faculty and staff who have enabled them to attain their highest aspirations,” President Natalicio said. “UTEP plays a major role in the development of the surrounding region, educating the next generation of leaders, conducting top-tier research that has earned us national recognition as a Carnegie R1 university, and contributing in a variety of ways to the region’s prosperity and quality of life. With its mission to continue spreading the word about this region’s many rich assets and opportunities, Visit El Paso complements our successful efforts to attract outstanding faculty and staff to this region. I thank Visit El Paso for this recognition and for its support of The University of Texas at El Paso.” 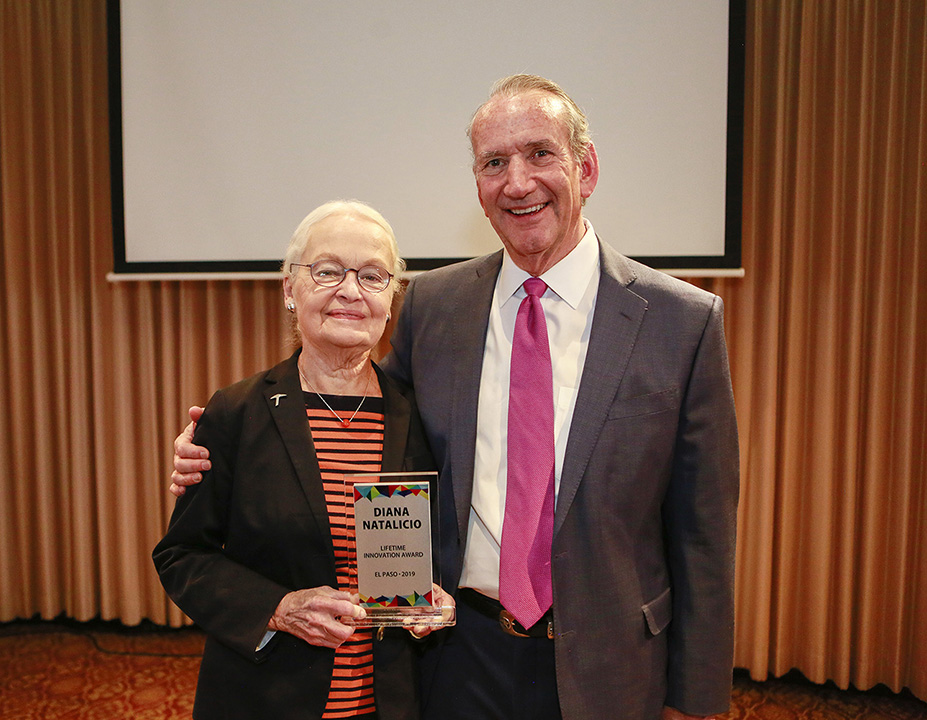 President Diana Natalicio received a special Lifetime Innovation Award during the Hub of Human Innovation’s third annual El Paso Innovation Awards breakfast at the El Paso Club on May 3. President Natalicio is pictured with Leonard “Tripper” Goodman III, who serves on the board of directors for the nonprofit business incubator. Photo: JR Hernandez/UTEP Communications

President Natalicio was selected for the award based on her work to enhance the University’s stature and the positive outcomes it has yielded for the rest of the Paso del Norte region, said Bryan Crowe, general manager of Visit El Paso.

“We are honored to recognize such an influential leader,” Crowe said. “Dr. Natalicio has not only put UTEP on the map, but has been a vital ambassador for El Paso and the region. When selecting our recipients each year, we look for individuals who have embraced El Paso and its heritage, culture and people and go the extra mile to elevate the city to everyone they come in contact with. It only seemed fitting that we select Dr. Natalicio as this year’s recipient for her dedication to the University and to El Paso.”

The Hub of Human Innovation presented President Natalicio with a special Lifetime Innovation Award on May 3.

The awards recognizes individuals who encourage business innovation and contribute to the growth and prosperity of the region.

“I am honored and grateful to the Hub of Human Innovation for this recognition of UTEP’s success over the past 30 years in preparing all talented and high-aspiring young people to contribute to the future prosperity and quality of life of this Paso del Norte region,” President Natalicio said. “We look forward to future opportunities to participate actively in regional efforts to develop locally — and attract from elsewhere — enterprises that will be aligned with this enriched pool of UTEP graduates, too many of whom now leave the area to pursue careers commensurate with their skills and career goals.”

YWCA El Paso del Norte Region (YWCA) recognized President Natalicio on April 25 at the 26th Annual Women’s Luncheon with the organization’s YWCA Community Impact Award for her commitment to and passion for improving the El Paso community and for serving as a role model to women and girls everywhere. The award is also in gratitude for her 31 years of service to UTEP as its President.

“Dr. Natalicio is a pillar of strength and has been a catalyst for countless amazing accomplishments at UTEP and in our city,” said Sylvia Acosta, Ph.D., CEO of YWCA. “Beyond that, she is someone I, and the members of our Women’s Luncheon committee, have admired for her leadership and passion. We are proud to be able to honor her as a role model and empowering woman in our community.” 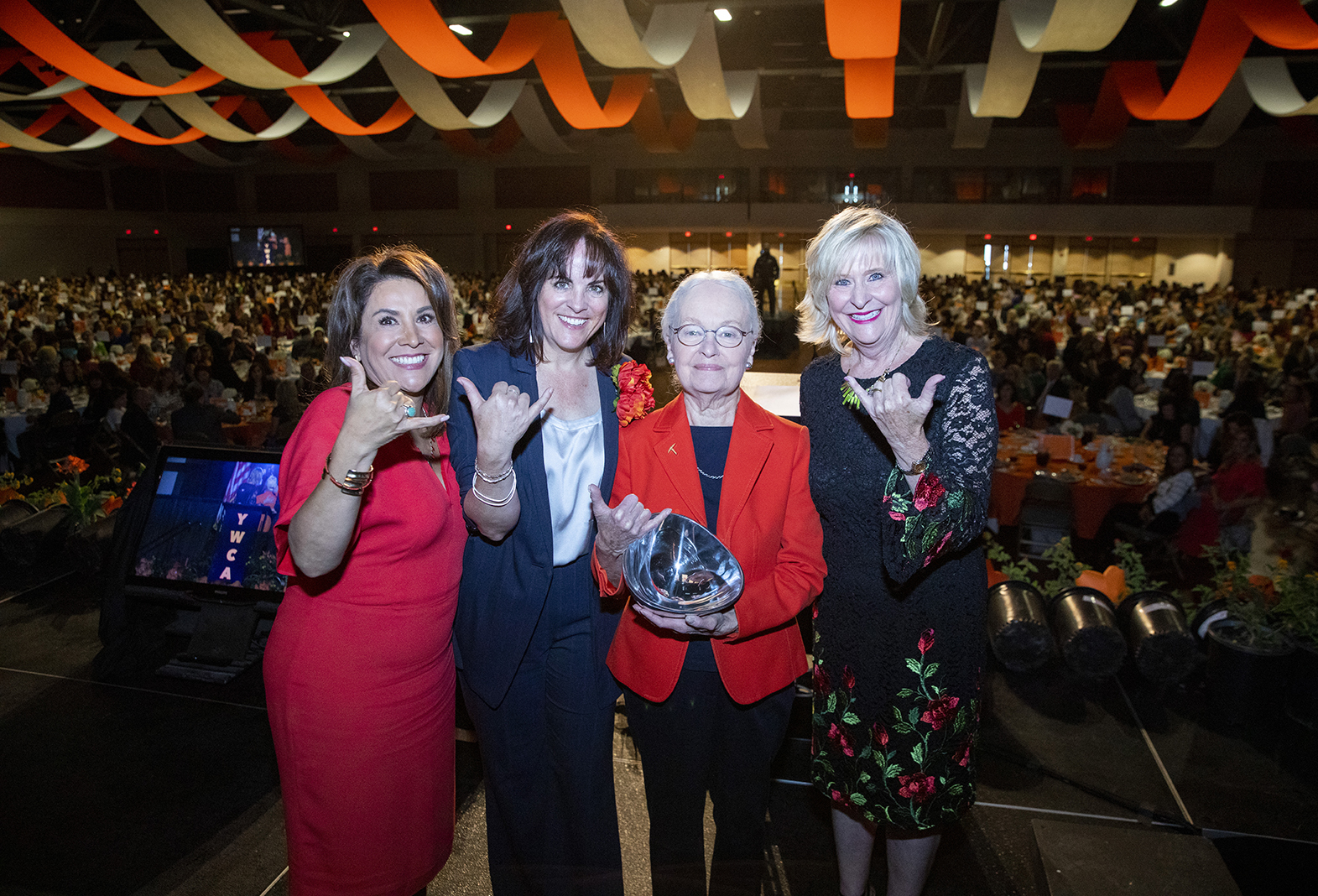 The annual luncheon has raised funds to support thousands of women, children and families in El Paso, including home and supportive services for survivors of domestic violence, racial justice education, affordable housing opportunities, and workforce and life skills development, to name a few.

“I am deeply honored to be recognized by YWCA El Paso del Norte Region with its inaugural YWCA Community Impact Award,” President Natalicio said. “This award strongly validates the important role UTEP plays in our community – a role we could not successfully fulfill without the collaboration of individuals and organizations such as the YWCA that work tirelessly to help people of all ages achieve their dreams. It is a privilege to work closely with our local partners to elevate the quality of life for all residents of the Paso del Norte region.”

President Natalicio was one of two higher education leaders recognized as winners of the Clark Kerr Award from the University of California, Berkeley’s Division of the Academic Senate for their “extraordinary and distinguished contributions to the advancement of higher education.”

The division announced on April 22 that President Natalicio and Freeman Hrabowski III, president of the University of Maryland, Baltimore County, would receive the award, which is named in tribute to the leadership and legacy of University of California President Emeritus Clark Kerr. The award, created in 1968, recognizes those who have made extraordinary and distinguished contributions to the advancement of higher education.

The group selected the 2019 awardees for their contributions to higher education and for leading transformative change at their respective institutions. They will receive their awards this fall.