EL PASO, Texas – Each year, The University of Texas at El Paso and the UTEP Alumni Association honor some of the University’s most accomplished and dedicated alumni through the Distinguished Alumni and Gold Nugget Awards.

This year, the group of individuals selected for these prestigious awards are all proud Miners who have made their marks, not only in their careers, but in the lives of others.

The Distinguished Alumni and Gold Nugget recipients are scheduled to be officially recognized during UTEP’s 2020 Homecoming events Oct. 11-17.

The Distinguished Alumni Award is the highest recognition bestowed upon alumni of the University whose achievements stand out as monuments to dedication, integrity and hard work.

“Our Distinguished Alumni represent the University as a whole,” said Maribel Villalva, assistant vice president for alumni relations. “They have been longtime UTEP supporters by serving on college advisory boards, funding scholarship endowments and helping put UTEP on the map by earning presidential appointments; creating life-changing technology; and providing historical context for the big screen.”

As a UTEP alumnus, J. Steve DeGroat has remained engaged with the University as a volunteer and a philanthropist. He has served as president of the Alumni Association and as a member of multiple boards to include Friends of the Library, Legacy Campaign Cabinet, and the College of Business Administration Advisory Council.

DeGroat is the longtime owner of Lincoln Financial Advisors’ El Paso branch, a financial planning firm. The leadership experience he has honed has yielded opportunities to serve the El Paso community as chairman of the board at University Medical Center and the YMCA, president of the Ronald McDonald House and the Sun Bowl Association, and currently as chairman of El Paso Health.

Joe M. Gomez serves as the director of business development and community affairs at Jordan Foster Construction in El Paso. He has served the El Paso community tirelessly and has received numerous awards and accolades for his service, such as the City of El Paso’s Conquistador Award and the McDonald’s Hispanos Triunfadores Award, and was inducted into the El Paso Athletic Hall of Fame. In 2017, Texas Gov. Greg Abbott appointed him to serve on the Pathways to Technology Early College High School (P-TECH) Advisory Council.

Gomez’s contributions to the University have been numerous. He served on UTEP boards, raised money for various departments and programs, and provided pro bono work for several campus projects. In 2006, the College of Liberal Arts selected him as one of its Gold Nugget Award recipients.

For decades, Gomez has been known for his steadfast dedication to promote and preserve the history of the 1966 Texas Western College (now UTEP) men’s basketball team that won the NCAA Championship. He has worked on three documentaries about the team’s accomplishment, assisted the Disney production team on the 2006 film “Glory Road” by providing historical artifacts and memorabilia used in the movie that told the team’s story, and was awarded the El Paso Historical Society Hall of Honor Award for his work to preserve the team’s history.

The National Solar Observatory in Sunspot, New Mexico, immediately recruited Buzz Graves after he earned his graduate degree from UTEP to assemble its refractive solar coronagraph telescope. Two years later, he joined Kitt Peak Observatory near Tucson, Arizona, where he pioneered the use of digital sensors for ultraviolet, visible and infrared observations. In 1989, Graves traversed the Pacific Ocean to join the University of Hawaii Institute for Astronomy, home to some of the world’s largest optical telescopes atop Mauna Kea on the Big Island.

While in Honolulu, Graves obtained funding for 11 years from the National Science Foundation to invent adaptive optics, a concept that revolutionized astronomical observations. Ground-based telescopes with larger apertures could now surpass the resolution of the Hubble Space Telescope once the atmospheric blurring could be removed. This emerging technology brought notoriety for Graves through abundant publications, citations and a place in astronomy textbooks.

In 2000, Graves founded Laplacian Optics Inc., which later became AOptix Technologies, in Campbell, California. At AOptix, he applied his adaptive optics experience to obtain 20 patents in areas of free space laser communications and iris identification. In recent years, Graves has worked as a consultant with Koshla Ventures, KLA-Tencor and SA Photonics. Today, he is a full-time employee with Apple who works on current and future products.

Noel Longuemare began his professional career with Westinghouse, where he played a lead role in the development of modern radar and avionics systems for airborne, land and surface applications, as well as advanced space systems. The Westinghouse Electronic Systems Group later named him corporate vice president and general manager of its systems development and technology divisions.

After 41 years at Westinghouse, Longuemare accepted a four-year appointment by President Bill Clinton to serve as the principal deputy under secretary of defense for acquisition and technology at the Pentagon, where he was responsible for the U.S. Department of Defense’s (DoD) $100 billion acquisition budget. Within that assignment, he served as Acting Under Secretary of Defense, and represented the United States on the NATO Defense Ministers panel in Brussels, Belgium. Additionally, he hosted the 1997 Tri-Lateral Defense Conference in Vancouver, Canada. For his many contributions, he was awarded three DoD Distinguished Public Service awards and the prestigious David Packard acquisitions award.

Throughout his career, Longuemare has served in top-level management and technical positions for the DoD and the aerospace industry. Additionally, Longuemare holds eight patents and 17 patent disclosures.

Today, he oversees Longuemare Consultants Inc. and continues to participate in studies and advisory boards for the government and industry. He is a member of the executive advisory board for the U.S. Navy, the Strategic Red Team for the Massachusetts Institute of Technology/Lincoln Laboratories and UTEP’s Engineering Advisory Board.

For over 30 years, the University has recognized exceptional graduates from each of its colleges and schools who have excelled in their professions, given back to their communities and alma mater, and serve as an inspiration for future generations of Miners.

“Our 2020 Gold Nuggets, representing UTEP at the college level, were selected because of their selfless commitment to their respective fields,” Villalva said. “Honorees include Miners who have been lifelong educators, medical and rehabilitation healers, social justice fighters, female pioneers in their fields and engineering innovators. They all credit UTEP for their foundation and the opportunities UTEP provided.” 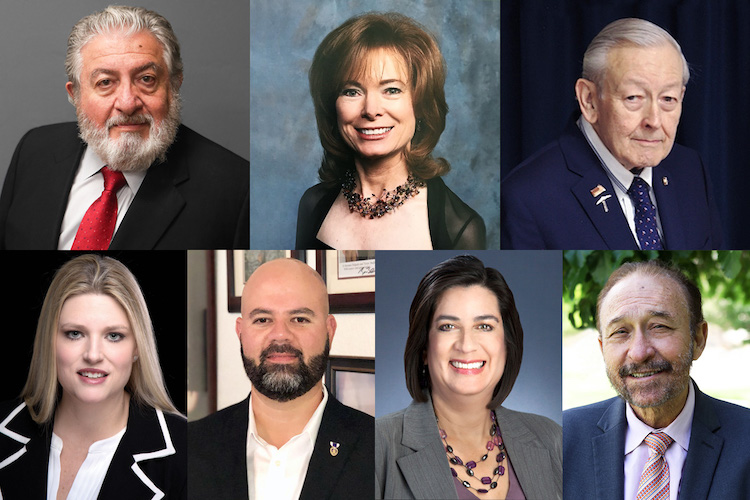 Dwayne M. Aboud, M.D., enjoyed a 40-year career as a private practice internal medicine physician and has served as medical director of Elara Caring Hospice in El Paso since 2006.

Aboud has given back to the El Paso community through service on boards including the Paso del Norte Health Foundation and El Paso Diabetes Association. He also has served as team physician and clinic coordinator for UTEP Athletics since 1988. Aboud founded the El Paso Border Youth Athletic Association in 1999 and was inducted into the El Paso Baseball Hall of Fame in 2018.

After 21 years as an educator, Gloria Greve Perry-George became executive director of the Mary L. Peyton Foundation, a nonprofit that offered financial assistance to those in need to include students who wanted to attend UTEP. She stayed involved with her alma mater through continuing education courses and attendance at athletic events.

Her community service through the years included work with PTAs, Girl Scouts and various philanthropic groups. She traveled the world and, always the educator, she would visit schools to learn about their curriculum and teaching methods.

Perry-George projected a positive light in her later years despite several bouts with cancer, which eventually claimed her life in 2019.

In 1978, Lamberth moved to California, where he worked on military communications and electrical power conversion systems for companies such as Hughes Aircraft and L3 Power Systems. He later established his own consulting firm, HRL Company.

He has enjoyed many professional memberships and continues to serve on the UTEP College of Engineering Advisory Board.

A roadside bomb explosion in Iraq in 2009 left Victor L. Medina with a traumatic brain injury, or TBI. Despite his injuries, the Army sergeant first class proceeded to graduate with a Master of Rehabilitation Counseling from UTEP in 2014 with a 4.0 GPA.

During his recovery, Medina shared his story on tbiwarrior.com to help other soldiers and their families. The website has since evolved into the TBI Warrior Foundation, which Medina established in 2018 with the mission to improve the quality of life of veterans, civilians and children living with brain injuries and their caregivers.

Medina credits UTEP with helping him thrive as a veteran with combat wounds. He and his wife, Roxana Delgado, Ph.D., a UTEP alumna, have become advocates for TBI awareness, working to improve care and services for brain-injured service members and civilians.

In 1993, Marcela Navarrete joined El Paso Water as an accountant. Throughout her 20-plus-year career with the utility, she steadily climbed the ranks and eventually became the first woman to serve as chief financial officer. Today, Navarrete is vice president of strategic, financial and management services.

Navarrete has volunteered on many community and professional boards. In 2016, El Paso Inc. named her a Woman of Impact. Additionally, Navarrete has served with various associations including the Texas Society of Certified Public Accountants, Government Finance Officers Association and American Water Works Association.

Carlos Spector enlisted in the U.S. Air Force after high school and served most of his time in Germany. After an honorable discharge, the El Paso native spent one year in an Israeli kibbutz (commune) and returned home to enroll at UTEP, where he honed his analytical skills that led to his decision to pursue a law degree.

Throughout the years, he has participated with several civil and immigration rights groups such as LULAC and the Texas Latino-Jewish Alliance and co-founded Mexicanos En Exilio. His work has been honored by many human rights organizations and featured in two award-winning Mexican documentaries as well as in Mexican and Canadian doctoral dissertations.

To give back, Spector, has taught a Mexican political asylum course as a guest lecturer with UTEP’s Center for Inter-American and Border Studies program, which he said has confirmed his commitment to the University and the border.

Allie Trimble-Lozano serves as regional chief executive officer of The Hospitals of Providence microhospitals with Emerus Holdings Inc. She has successfully led the development and operation of three neighborhood hospitals in Horizon City and in Northeast and far East El Paso, and eight health care facilities in San Antonio.

Since 2002, Trimble-Lozano, an El Paso native, has worked her way up from critical care nurse to one of the most successful health care administrators in the Paso del Norte region.

Among her notable accomplishments, Trimble-Lozano successfully established 12 urgent care centers from El Paso to the Interstate 35 corridor from San Antonio and Austin.