On the heels of its recent designation as an R1 research institution, The University of Texas at El Paso reached a major construction milestone for a facility that will support the continued growth of UTEP's research agenda for decades to come.

UTEP celebrated the Interdisciplinary Research Building's “topping out” on Feb. 11, 2019, in the El Paso Natural Gas Conference Center. University leaders and construction workers signed a flag with a rooster, which has a special cultural significance in Bhutan, that will remain on top of the building through the remainder of the project. Photo: JR Hernandez / UTEP Communications

University officials and construction crews gathered Monday, Feb. 11, 2019, to celebrate the “topping out,” or completion of the major structural elements of the Interdisciplinary Research Building (IDRB) at the southeast corner of University Avenue and Sun Bowl Drive. However, they put a twist on the ancient construction tradition where workers place a tree on the last beam that will top off a structure.

Instead, University leaders and construction workers who participated in the project signed an orange flag with a rooster on it that will remain on top of the building through the remainder of the project. The rooster has a special cultural significance in Bhutan, the small Himalayan kingdom that has influenced the University’s architecture since 1917.

“The rooster is a symbol of intelligence, confidence and roosters are also considered to be serious, deliberate, straightforward and decisive,” said UTEP President Diana Natalicio. “In addition to being all of that, roosters are known to be, in Bhutan, highly collaborative, and this fits perfectly – everything that we expect out of this new building.”

The celebration took place about a month after UTEP’s recent R1 designation (top tier doctoral university with very high research activity) in the Carnegie Classification of Institutions of Higher Education.

“Without facilities like the one you’re building for us, we would not be able to do this level of research,” President Natalicio said to the contractors who attended the event at the El Paso Natural Gas Conference Center. “On behalf of everyone who is involved in research at The University of Texas at El Paso – faculty, staff and, most of all, our students – I thank you for everything that you’ve done to create this beautiful facility.”

President Natalicio described the IDRB as a facility that will capitalize on the talent and expertise of people across the campus.

Among the audience members was Paloma Zamarripa, a UTEP graduate who earned her bachelor’s degree in civil engineering in 2017. Today she is a Hensel Phelps Construction Co. field engineer assigned to the IDRB project. 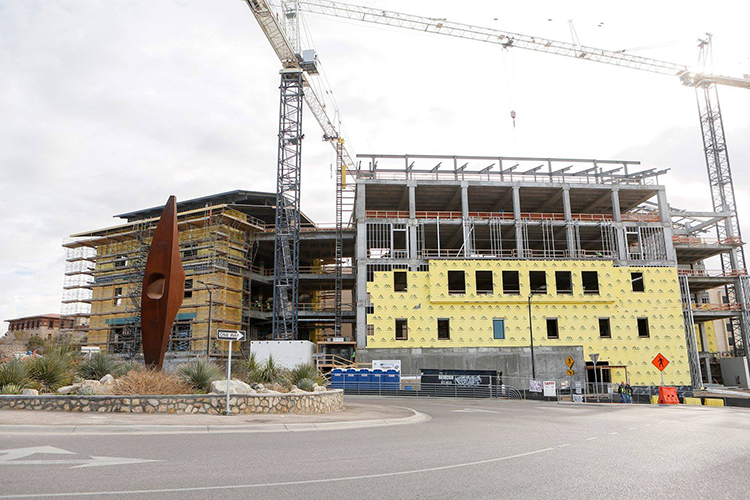 The “topping out” of the Interdisciplinary Research Building, located at the southeast corner of University Avenue and Sun Bowl Drive, signifies the completion of the major structural elements of the building. Photo: UTEP Communications

Zamarripa said her UTEP experience prepared her for her IDRB assignment. She said she looks forward to seeing the finished product.

“It’s pretty beautiful, actually,” Zamarripa said. “Knowing what the purpose of this building is, who it’s being built for, and especially being a former research student as well – it’s pretty close to my heart.”

Now that the structural elements of the IDRB are completed, work will continue on the building’s exterior and interior elements. Greg McNicol, associate vice president for facilities management, said the topping out ceremony typically signifies construction’s halfway point.

Work crews should complete construction of the highly anticipated $85 million, approximately 150,000-square-foot building by early 2020. It should open later that year.