The Department of Criminal Justice says “Congratulations Cameasha! We are proud of you!!”

Cameasha L. Turner (B.A. Criminal Justice, 2016) grew up in a predominately black and poor part of Dallas, one of 11 children. She says that because her home life wasn't always stable and she witnessed more than her share of crime and drug activity, she simply hung on to the idea that her pursuit for academic excellence would elevate her and her family into better circumstances. At UTEP, she was named the 2016 Female Athlete of the Year and graduated from the Department of Criminal Justice with a 4.0 GPA. She was a consistent volunteer with Special Olympics and a frequent visitor to children hospitalized with cancer. "When I put my mind to something, I do it," Turner told the Notre Dame Law School publication. "That's how I treated basketball. I worked out and practiced to perfection. I'm taking the same approach to law school. I'm going to work hard and study to get the grades that I want." Her primary focus is to be a criminal defense attorney and, ultimately, a judge. An excerpt from Turner's personal statement for the NCAA Woman of the Year award reads: "Education taught me how to live, think, overcome obstacles, and not to give up. Everyone expected that I'd be a girl who would turn to pregnancy, drugs and poverty; stuck in a cycle. Through determination, will, and basketball I became stronger than my environment and have succeeded in life. My next chapter is law school. Like basketball, law is a skill and it rewards talent."

Samuel Pena has been named the new Fire Department Chief in Houston. Mr. Pena earned his undergraduate degree in Criminal Justice at UTEP and is currently the Fire Chief in El Paso.

How important was it for you pursing your Criminal Justice Degree?

Coming out of high school I wanted to go to Law School.  The Criminal Justice program was very diverse and perfect for what I was trying to do.

Can you tell us about your experience as a student in the then new Criminal Justice program?

The new degree in Criminal Justice appealed to much of the student body. The program grew swiftly and the professors were excellent. Dr.Graves as the head of the department did an outstanding job. The first graduating class to receive a BS in Criminal Justice from UTEP understood the significance of the honor. We were all excited and proud.

Please share some information about your life after graduation.

After getting married to J. Manuel Banales (BA in PoliticalScience, UTEP Class of ’72.  He later graduated from Law School), we relocated to Corpus Christi Texas in 1975. I started work as a Juvenile Probation Officer for 2 years, and then took sometime off to start a family. While raising 5 children I still remained very active with the community, church, and school. With the BA Degree in Criminal Justice I was accepted into Law School, but decided not to go. Later I ran for the Tuloso-Midway ISD School Board in my district and was a member for two 3-year terms from 1997-2003. That experience propelled me to run for and become the Nueces County Commissioner, a position that I held for the term 2005-2008.

Given your work experiences,do you think you made a difference for women who entered these positions after you?

Yes, I believe my experience has made a difference.  I often stated that, as the County Commissioner,it was important that I was a woman who got her degree, and was very active in the community.  Getting elected to 2different offices allowed me to be an example of how women can go back to a career after starting a family if they have obtained a degree.

What advise would you give youth today interested in a degree in Criminal Justice?

I tell young people interested in Criminal Justice that it’s one of the best degrees to get, because it is so diverse and well rounded. Both my son and daughter are Criminal Justice majors, my daughter here at UTEP and my son at Sam Houston State University.  I feel that now more than ever education is extremely important.

Any comments on today’s UTEP?

I am very impressed with the direction the renovations will take UTEP.  I feel that the campus is very easy to walk and it will be beautiful. I am also was very impressed with faculty that I have come in contact with when I have visited with my daughter who is attending UTEP

Any closing comments on your life today?

I feel very blessed that I have been able to do as much as I have, raising a family and having a career.I am still active in the League Of Women Voters, Hispanic Women’s Network, Girls Scouts Of America, West Side Business Association, as well as Local Politics in my area.

David Montoya is the first Hispanic inspector general of the U.S. Department of Housing and Urban Development (HUD). He is also a very proud UTEP alumnus.

Montoya had been working – both a full-time job and at his studies – for six-and-a-half years before he earned his undergraduate degree in criminal justice in 1986. Almost 30 years later, he says that experience was one of the most valuable in his life. 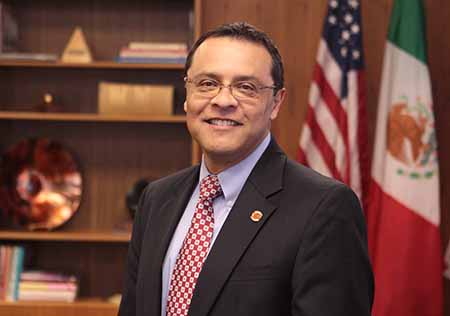 He began his career at the Drug Enforcement Agency, but moved on to fighting white-collar crime at the U.S. Environmental Protection Agency and the Office of Investigation for the Office of the Inspector General before President Barack Obama nominated him for his current position in July 2011.

During his campus visit on Feb. 19, Montoya advised students that white-collar crime was “the new wave” of criminal justice. He was impressed with how engaged the students were and how confidently they spoke with him and asked their questions.

“I’m not sure when I was their age I could have done the same thing,” he said.

On Wednesday, he visited with President Diana Natalicio and received his Gold Nugget Award, met with several professors from the College of Liberal Arts, spoke to a criminal justice class, was taken on a campus tour, and had an intimate discussion with the Epsilon Epsilon chapter of Pi Sigma Alpha, the National Political Science Honor Society.

“I’m humbled by where I come from,” he said of both UTEP and the border region. “I always draw on how blessed I was to have this opportunity when others didn’t.” He recalls looking over the border into Mexico while walking back to his car after classes and feeling more determined to take advantage of what he was being offered. “I try not to be more than who I really am, and who I really am is the boy from El Paso.”

Montoya’s background also informs his decision making on a day-to-day basis at HUD. While he and his staff are charged with oversight of HUD policies, processes and funding, he also stresses to his office that there is a balance.

“There are differences between what Washington might see versus what a local community might see,” he said. “Being able to have that recognition that when we do oversight and we look at a particular matter that didn’t allow for the monies to be used appropriately to serve the underprivileged, that means something. That means families who needed the help didn’t get the help.”

Another key message Montoya hoped to convey to the UTEP students was the importance of strong communication skills.

“As an executive and somebody who hires staff, one thing that every educational institution needs to do is to ensure that our students are coming out with an ability to communicate, not only orally but in writing,” he said. “To write a report and have somebody understand what you do is more important than anything else.” Looking back, Montoya is very appreciative of the number of English courses UTEP required him to take, calling them “a big contributor to my success.”

He encouraged students to take opportunities and not be afraid to walk through doors that open to them, even if they don’t know how those steps may contribute to a career path.

“As long as you’re willing to do that, you’ll be surprised at what you’ll find on the other side,” Montoya said. “That’s how I came to my success – I was just willing to accept the responsibility. Make no mistake, it was at times scary and sometimes made me feel ‘I wonder if I’m going to crash or burn doing this,’ but for me it was a motivator to make me focus and get things done well.”

Liberal Arts Dean Patricia Witherspoon was thrilled to have Montoya on campus and interacting with the latest generation of Miners.

“Inspector General Montoya is an outstanding public servant and an excellent role model for our students,” she said. “His work ethic, commitment to excellence, and dedication to his important government position are great lessons to students and alums alike. He is indeed a Gold Nugget worthy of our respect and admiration.”

While Montoya doesn’t label himself a role model, he is well aware he is being closely watched as an example for generations who follow him, especially as just one of three Hispanic inspector generals in the United States. All of his life experience and professional accomplishments boil down to a very simple motto he shares with gusto: “Do the right thing because it’s the right thing to do. If you follow that adage, you’re going to be fine no matter what you choose to do for a living.”