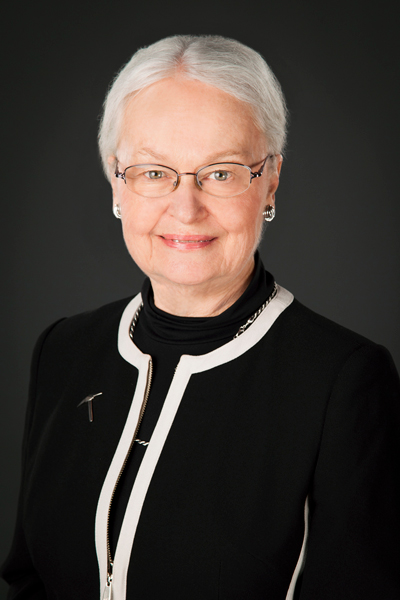 Diana Natalicio was named president of UTEP in 1988. During her long and distinguished career with the University, Dr. Natalicio has also served as vice president for academic affairs, dean of liberal arts, chair of the modern languages department and professor of linguistics. The University of Texas System Board of Regents named her President Emerita in August 2019 when she stepped down as President after 31 years. Her sustained commitment to provide all residents of the Paso del Norte region access to outstanding higher education opportunities has helped make UTEP a national success story.

During Dr. Natalicio’s tenure as president, UTEP’s enrollment grew from 15,000 to over 25,000 students, who reflect the demographics of the Paso del Norte region from which nearly 90% of them come.  More than 80% are Mexican-American, and approximately 5% commute to the campus from Ciudad Juárez, Mexico.  From 1988 to 2019, UTEP’s annual budget increased from $65 million to more than $500 million.  UTEP is designated as a Carnegie R1 university, recognized nationally for both the excellence and breadth of its academic and research programs. UTEP’s annual research expenditures grew from $6 million to nearly $95 million per year, and doctoral programs from one to 22 during this same period. To accommodate steady growth in enrollment, academic programs and research, the university has recently committed nearly $400 million in new and renovated facilities expansion in science, engineering, health sciences, and other student quality-of-life related infrastructure.

Dr. Natalicio has served on numerous boards including the Hispanic Scholarship Fund (HSF), Rockefeller Foundation, Trinity Industries, Sandia Corporation, U.S.-Mexico Foundation for Science (FUMEC), American Council on Education, National Action Council for Minorities in Engineering (NACME), Association of Public and Land-grant Universities (APLU), and Internet2.  She was appointed by President George H.W. Bush to membership on the Advisory Commission on Educational Excellence for Hispanic Americans and by President Bill Clinton to the National Science Board, where she served two six-year terms, including three two-year terms as NSB vice-chair.

In 2017, Dr. Natalicio was named one of Fortune magazine’s Top 50 World Leaders.  In 2016, she was honored with the Hispanic Heritage Award in Science, Technology, Engineering, and Math, and she was included on the 2016 TIME 100 list of most influential people in the world.  In 2015, The Carnegie Corporation of New York honored Dr. Natalicio with its prestigious Academic Leadership Award.  In 2011, the President of Mexico presented her the Orden Mexicana del Aguila Azteca, the highest recognition bestowed on foreign nationals.  She was inducted into the Texas Women’s Hall of Fame, honored with the Distinguished Alumnus Award at The University of Texas at Austin, and awarded honorary doctoral degrees by St. Louis University, Northeastern University, Victoria University (Melbourne, Australia), Georgetown University, Smith College and the Universidad Autónoma de Nuevo Leon (Mexico).

A graduate of St. Louis University, Dr. Natalicio earned a master’s degree in Portuguese and a doctorate in linguistics from The University of Texas at Austin.